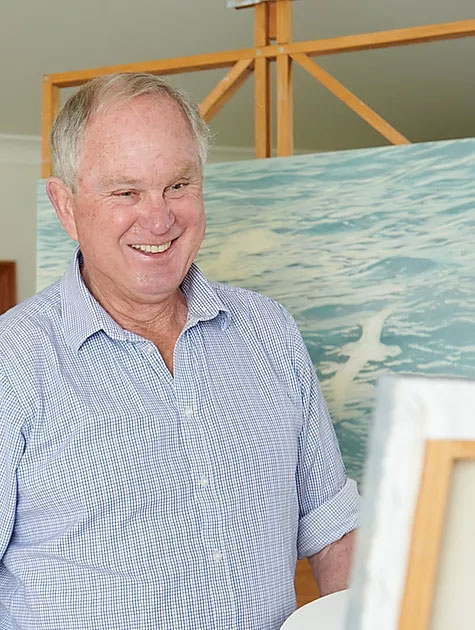 AUSTRALIAN ARTIST RICHARD WEATHERLY IS well known for being a conservationist and innovative farmer. His love of birds and the natural world was fostered during a rural childhood. His parents and grandparents had kept lists of the bird species on the family property, but it was under Richard’s stewardship that the numbers of species almost doubled. He and his wife Jenny established over twenty wetlands and revegetated the denuded habitat with trees and a rich selection of understorey plants.

While studying history at Cambridge, Richard had carved two sculptures from a broken walnut gunstock. These were spotted by a London gallery, exhibited and sold. Richard followed this up with two solo exhibitions of his paintings, having taken the opportunity to study with some renowned British artists. The die was cast: to the dismay of his parents, he decided to become an artist.

A year in Africa, sometimes assisting in wildlife research, enhanced his bushcraft, biology and tracking, and his introduction to falconry began a lifelong fascination with birds of prey, which he studied, sketched, painted, trained and rehabilitated until they were fit for release.

The Australian artist, Richard has exhibited his paintings on five continents, in some of which he has also worked as a biologist and naturalist. In the US and Mexico he participated in ornithological surveys and was the only artist from the southern hemisphere invited to paint a plate for the prestigious Waterfowl of North America. In Antarctica he studied Adélie penguins as part of a ground-breaking ecosystem monitoring project, and assisted in CSIRO environmental surveys throughout Australia. These, with surveys in Papua New Guinea with Dr Richard Schodde, were the fieldwork for The Fairy-Wrens, which won a coveted Whitley Award.

Richard’s outstanding contributions to conservation, restoration of the environment, and global sustainability, his services to rural community through Landcare, and his contributions to the visual arts, have all been acknowledged with prestigious awards, including an OAM.